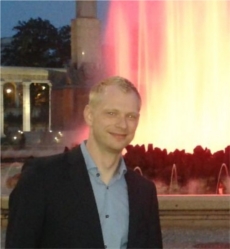 Doggy is a 2.1m tall robot consisting of three revolute joints. We have a hip (yaw) axis, a pitch axis and a roll axis. The roll and pitch axis are describing a patially sphere, where the end-effector (the head) is moved on. The yaw axis turns the partially sphere , so it is possible to reach positions which would not be reachable only by axes for roll and pitch. As the axes intersect in one point we have a redundant degree of freedom.

The robot's mechanical structure has been designed by Prof. Dr.-Ing. Udo Frese and me as reviewer. I am responsible for the electronics (schematics) with Prof. Dr.-Ing. Udo Frese as reviewer. The PCB design based on this schematics has been done by Budelmann-Elektronik. For the mechanical part we used a lot of Plexiglas components and cutted them for our purposes with a lasercutter (thanks to Alexis Maldonado from TAB). The resultant interior is seen on the right picture. Doggy's costum was a Master Thesis of Ray Tzeng from the University of Arts Bremen.

The aim of Doggy is to play ball games. His first public performance was at the OPEN CAMPUS day of the University of Bremen. A Video of the performance can be seen here. Actually Doggy is not able to play balls back to the opponent, but my goal is to make this possible using a Task Level Optimal Controller. To control the system the dynamics parameters have to be guessed (calibrated), which is a challenge due to the first bearing. This bearing oscillates while moving axes two and three. The beahavior can be seen here.